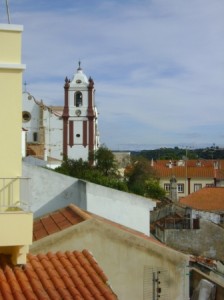 We drive to Silves to explore this former Moorish kings’ capital of the al-Gharb (Algarve). Nowadays it’s a quaint place, if rather touristy.  Nothing quaint about it in Moorish times, though, when…. 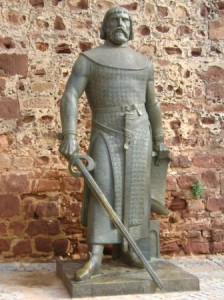 …one Sancho I arrived in 1189 with his rabble of Portuguese mercenaries and Crusaders, sending 30,000 Moors scuttling into the citadel for refuge. The Moors held out for a while due to their granaries and marvellous water cistern which had served the town (as they say, water is a precious well…) and opened negotiations with good ol’ Sancho. 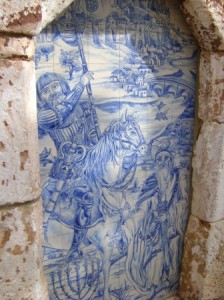 However, there was a bit of insubordination from the ranks who had been promised plunder, and when the Moors opened the gates to the town, 6,000 Moors were murdered. Nice lot, eh? ‘ Pity governments still don’t seem to have learned the lesson.

Curiously enough though, two years later the Citadel was handed back to the Moors, until 1249 when once again Christian forces took it over.

These days there’s a pretty garden at the scene of the crime: 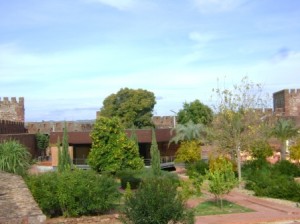 The red sandstone castle is fascinating. Lovely views from the top, too.

There’s a museum to visit… 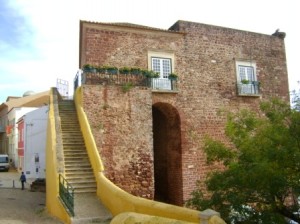 …though I was slightly more curious about the little chappie perched on the nest at the top on the right hand side. A huge stork!

By the way, I forgot to say the cistern at the castle is said to be haunted by a Moorish maiden who can be seen sailing across  the underground waters during a full moon (you can climb down steps into the cistern)…all in all, a poetic place. No wonder they have the Walk of Poets passing this way…

The hands of Spring built

The castle, upon the stem of the white lilys

They painted each wall silver

Where the brave men of the ruler

With swords of gold, fight with ardour.