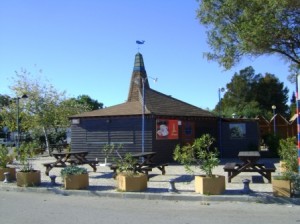 Terry and I decide that we must show Colin Fuzeta’s nightlife at its best, so we troop down to a little wooden hut next to the fishing boats dotted along the harbour.

There’s already a buzz though it’s early, only 9.45pm and we know the action won’t start for at least another half an hour. No hope of a seat – ah, but what’s this? A lady sitting alone at a table for four beckons us over – there is room for us with her. Must have known there would be a catch.

Gradually the musicians trickle in and begin a prolonged tuning up and re-arranging of cables, with  much “um” “dois” “três” into the microphones, reminiscent of Terry’s times playing with some amateurs in the UK. The room has filled up and at last the music begins. Terry and Colin order a bottle of wine and two glasses, which our table companion assures us in basic English is “very good”. The barman apologises that he hasn’t any cheap bottles left. This expensive one will set Terry back seven euros…

Of course we’ve heard Domingo and his amigos play before, but we still appreciate that they’re pretty damn good. Domingo’s voice sears into the songs whilst the young lad (who I suspect is his son) plays a mean lead guitar. There’s a young lad on bass, one on rhythm, and on the drums, one with long black dangly hair and the beginnings of a need to shave his upper lip, who attacks the kit with verve. They play Metallica, U2, Guns and Roses, Kansas and….other music not entirely to my taste (though it would have been once) but the pace really gets me going, and the crowd are loving it.

There’s a young lad in a black leather jacket and with multiple face piercings who, had we been in Shakespearean times, I would have described as the court jester. He struts around playing air guitar even before the music begins, eyeballing everyone and flicking a paper straw in the air. When he gets loud, the bar man tells him off. He seems unperturbed.

We’re scarcely into the second number when our table companion leans forward and asks if she could have a drink. Terry offers to get another glass to share the wine. No, she says, I’ll have something different. She calls the barman over and speaks into his ear. He brings sambuca, which costs Terry a couple of euros, and at the same time she cadges a cigarette from the barman. Yes, there’s not a smoking ban here unfortunately.

We’re all sitting in our coats as the hut isn’t heated and it’s a pretty cold night again. A woman in a brown fur coat and a red trilby is seated like a queen at the table behind. A woman in a leopard skin effect trouser suit with pink tights, red shoes and a red scarf clashes beautifully in the surroundings. Our table companion wanders over to her and whispers in her ear. The woman in the leopard skin suit looks uncomfortable and digs evasively into her handbag shaking her head. Our table companion cadges another cigarette from the barman.

The group of fishermen standing by the bar sway their beer bottles in time to the music. A couple rise from their table and begin to dance. They must be well over seventy but they dance as if they were twenty, only somewhat more slowly. The woman backs flirtatiously into the neck of Domingo’s acoustic guitar. Domingo pushes the couple gently away. They carry on dancing until perhaps wine has got the better of them and the woman stumbles unceremoniously to the floor. Her partner helps her up, and they continue tottering in time to the music.

Our table companion has cadged more sambuca from the man behind her. Plus a cigarette. The court jester has meantime become extremely enthusiastic about the music and is standing in front of Domingo, mirroring his movements, blocking the audience’ view of Domingo. This doesn’t go down at all well with Domingo, who loves to be watched, and to be fair, is a great showman, pulling Marty Feldman eyes as he sings and grimacing with jaw askew into the microphone. His hands leave the guitar and plant themselves firmly upon each collar of the leather jacketed fool, swinging him with perfect force to one side, exactly to the beat of the music. Wonderful choreography, Domingo! The fool, perhaps a little ruffled, goes and sits on a step behind the wobbly dancing couple. Perhaps not the safest of places; twice the man leans Pisa-style towards me and I ready myself for an emergency exit!

The table companion has vacated the table and is roaming the hut cadging more sambuca and cigarettes, including from the lady in the fur coat. Throughout all, nobody seems to get upset or angry; it’s all a matter of course, accompanied by good-humoured smiles. Meanwhile Domingo’s rocking! Until, that is, two of his amigos have to go home to bed as they’ve school the next day, I guess, and two more amigos open up their guitar cases. The show goes on…