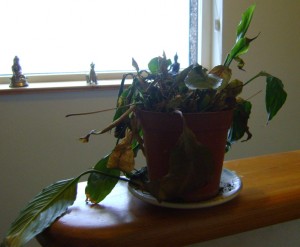 There I was, just settling into a Sunday night viewing of The Night Manager, the Other One just finishing off the clearing up after a satisfying feed of paella, when I hear this almighty clunk. Actually less a clunk than a bang-crash-wallop, as if Something Major has happened. I remain glued to Tom Hiddleston playing Pine in detecto-aerobics with the dastardly Richard Roper (Hugh Laurie), assuming, perhaps a little unkindly, that the Other One has, for the second time this week, fallen foul of the open and grizzly-jaws-door of the dishwasher and landed on the floor, maybe taking a rather large iron frying pan with him. On the screen, the action’s cranking up; some daft bat seems to have hung herself over a man. Of all things! And during International Women’s Week…
Suddenly the door of the living room swings open. The Other One stares at me.
“What are you doing?”
“Are you OK?” I ask, eyes riveted to the screen.
“Course,” he says. “That bang…”
“Thought it was you…”
We look at each other. Surely Pine hasn’t landed through the window into a room upstairs?
The Other One somewhat uncharacteristically leads the way upstairs, muttering something about burglars.
“Try my study,” I suggest from the Rearguard.
Before us is nothing short of a scene of devastation worthy of John Le Carré. A landslide of books and papers across the floor, a bookshelf three feet lower than it ought to be, and a desk half demolished (well, it was only one of those self-assembly units you can buy from somewhere that will remain nameless). Worst of all is my most precious possession – a classical guitar bought for me by my father when I was fourteen years old. I inspect it for damage; fortunately it’s only scratched – which is bad enough, but hopefully it won’t interfere with its lovely tone. We lift off the offending shelf, ripped from, I have to say, its rather flimsy mountings.
“An accident waiting to happen,” I grumble.
Beneath the shelf are the remains of a peace lily.

Crushed and shredded. Do I have to spell out the metaphor…?
I return to the intrigues of Pine and Roper. And the next morning I draft a poem downstairs at the kitchen table, while, miraculously, the shelf fairy reinstates the bookshelf with new stronger brackets.
All I can say is, thank goodness for TV catch-up.