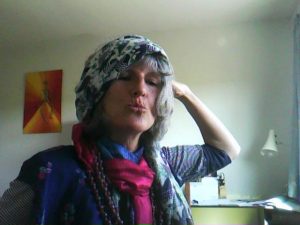 I wonder if any of you fellow word junkies out there go through fads in words. Mine, like all sensible infatuations, usually last for a few days before I’m on to the next one. At the moment it’s froufrou. Yes. Frilly and elaborate, which for anyone who knows me is probably the antithesis of what I stand for. Who knows why I chose froufrou. Maybe some gentile speaker from radio 4 permeated my ear canals at 6 a.m. before I was properly awake.

What I can tell you is that froufrou most definitely did not match my mood during the recent sea frets on this North East coast. Certainly up until today, over the past few days I’ve been feeling as if I climbed into a deep chasm of doom from which I will never escape. I haven’t been able to see the field next door to the house, let alone the poor cows, apart from the closest of them who’ve been sitting miserably in the damp mud, having pummelled away all the grass, it’s been so wet. I haven’t been able to see the lane, the trees, or the sea. Events I’ve planned to attend have been called off because of the weather. And the forecast seems nothing better than a promise of an hour’s sunshine sometime between now and 2018.

So why, in the midst of this dark misery do I come up with froufrou?

I call it survival instinct. After all, it’s not just the pea soup outside. Even if I switch the TV on I’m bombarded with items of disaster, bloodshed and greed. Judging by conversations with others, it’s not just me feeling it. I’ve heard people say that they don’t listen to the news, because they can’t bear it. In psycho-speak, that’s called avoidance. And, in my opinion, it’s not a solution. For two reasons. One, because it’s a refusal to take any responsibility for what’s going on in the world, and surely we, as members of the human race, all bear some kind of collective responsibility to work towards our fellow travellers (although it’s a mistake to take on too much personally as this can lead to mental breakdown). And Two, because avoiding facing up to bad stuff actually increases our fear of it. The more we dive under the covers, the more scary the big wide world can seem.

So, as usual, the conventional wisdom lies towards the middle ground. Is froufrou, then, the middle ground? Aren’t I being just a teensy-weensy too fluffy, considering all that fog? Well, my take is, even in the midst of all this gloom, we can allow ourselves some joy. And I mean joy without guilt. So why not indulge in some frills and ribbons? Nature’s certainly doing it – you’ve only to look on the grass verges to notice the razzmatazz of red and white clover, stitchwort, vetch, silver stars of groundsel seeds, endless varieties of grasses, cow parsley and May blossom, to notice a little natural froufrou. Oh, and by the time you’ve done that, you’ll notice the sun’s come out. Which gives you some moral fortitude both to contribute to brightening the wider world and to cope better next time the fog comes down.