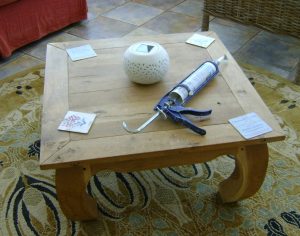 What else to do on an autumnal May afternoon than try a spot of DIY? In any case, I’ve got my Boy Scout cap on and am set on doing my good turn for the day. This doesn’t altogether preclude my prejudice against embarking upon a traditional province of men. Thus, in contrary mind (my wont), I’m up for it all the more. My egalitarian father (with ideas way beyond Jeremy Corbyn’s) taught me to use a drill and also that a rawl plug isn’t just a convenient improvisation for a witch’s hat on a peg-doll. I’m all for getting the job done when it needs doing, and far too mean to pay a handywoman.

So I hunt around the house for some of that squeezy white stuff which isn’t toothpaste and is used for tidying up shower areas. Bathroom and kitchen sealant, I believe it’s called. Duly, I find a huge tube of the stuff, big enough to clean a giant’s teeth, or rather, to glue them together so that he or she can’t gnash at any passing beanstalk. I take it to the bathroom and having dutifully ensured the area is clean and dry and that my hand’s steady and sure to produce a pure line, I begin to squeeze the handle of the very convenient gun in which it is ready-mounted. Then I squeeze. And squeeze. Harder until my hand hurts with the effort. And squeeze. Nothing. Aha! I realise that the layers of tape that the previous squeezy-white-paste-that-isn’t-toothpaste-user had placed over the nozzle after the last usage must have allowed in some air, and dried rock solid. The contents clearly must be expunged before the fresh soft moist stuff is available. Diligently, I poke it all out until there’s some nice gooey stuff ready to erupt, keen as a racing greyhound before the crate lid opens. Thereby lies, or rather splats, the trouble. I don’t know how it happened, milord, but the more I try to control the tube the more effusive the large vocabulary of the sealant becomes – such as, ‘look here, would you like me to go here?’ and ‘What about a nice patch here?’ and ‘How about I cover these nice shiny taps with a layer of white gunge, don’t you think it would add gravitas?’ Oh.

Within less than 30 seconds the Brighten-Up-Shower Project has morphed into a Damage-Limitation-Serious-Destickify Project. All I can say is, good job I have an apron on. Oh, and that this stuff doesn’t solidify at least for the first six minutes. Oh, and that the serious DIY expert’s hand-cleaning gunk removes the goo from your skin (although I’ve a suspicion that the skin on my hands is reduced to a layer of filigree pastry after this little escapade).

I put everything away and have to confess that my handiwork wouldn’t really pass muster with a B & Q employee. Never mind, I think. I’m a creative. And the Lord knows (well, he might if he existed) I am blessed with the ability to think outside the box, or, in this case, the squeezy tube. What else could this useless-fit-for-the-bin-implement be useful for? 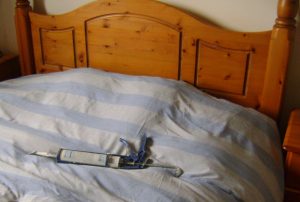 An alternative bunch of roses? 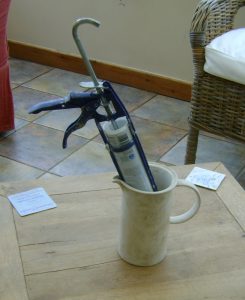 A rabbit to scare all rabbits from the rhubarb patch? 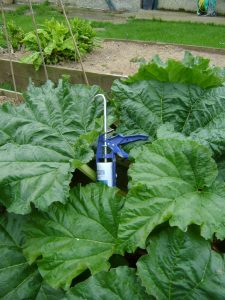 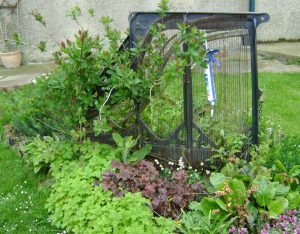 Who knows? I don’t. Though I do have an idea that I should be looking out a local handyman’s phone number, or writing that poem I’ve been meaning to write all day…